Dispatching Emergencies Is Their Business 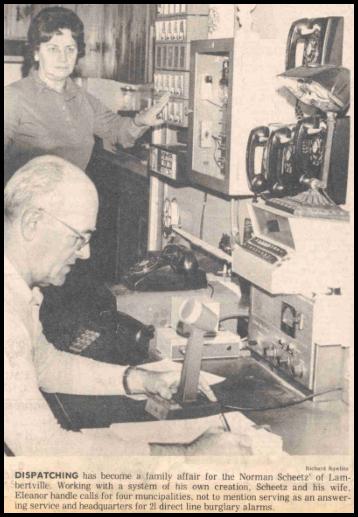 What originally began as a hobby over 20 years ago has turned into a 24 hour career for radio dispatcher Norman Scheetz and his wife Eleanor of Lambertville.

"I guess I have always had a latent interest in radios but it wasn't until I became a volunteer fireman that I really got a chance to work with and use one," said Scheetz.

Working out of the base station in police headquarters at city hall back in the late 1950s Scheetz spent several hours a week as a volunteer on emergency radio duty in addition to working full-time at the New Hope Paper Mill.

"In 1960, public safety director Howard Holcombe asked if I would be willing to monitor full-time all emergency calls for the city" said Scheetz.

"They didn't have any place for the calls to go and they needed a more efficient method of coverage so I took it on."

Today, using a system totally his own creation and complete with six phones, a fire box, radio and a case of burglar alarm circuits, Scheetz handles calls not only for the Lambertville police, fire and rescue squads but the West Amwell police, Stockton fire company and rescue squad and Village II in New Hope.

He also monitors the New Hope police under a mutual consent agreement between the two municipalities, serves as an answering service for Allen's Oil and CATV and has 21 different private burglar alarms hooked up to his system.

"This is a 24 hour a day job and there is not 10 seconds in any day that these phones and radio aren't covered," he said. Headquarters for the dispatching equipment is the Scheetz's dining room, but an identical set of phones is also located by their bed for night calls.

Before his retirement from the paper mill Mrs. Scheetz was on dispatch duty during the day. Today they share responsibility and according to Scheetz "this system couldn't have existed without my wife."

"I think we have been away from the phones a total of 16 days since we've begun," said Mrs. Scheetz.

The most recent escape was a three day trip and, according to Scheetz it took seven volunteers to replace him.

"It's an around the clock job and it can really work on you," said the dispatcher between phone calls and radio transmissions.

In addition to a few brief vacation trips the Scheetz are relieved of duty for four hours four nights a week.

A resident of Lambertville 54 years, both Scheetz and his wife agree that the worst experience they have had to face as dispatchers was the Lambertville gas explosions in 1971.

"I was home alone when the original call came in and after that we were on the phone for three straight days. We barely had time to eat let alone sleep." said Mrs. Scheetz. When the explosions occurred Scheetz was working at the paper mill.

"Back then I always carried a small pocket monitor so I could hear all the calls she was getting. When the explosion call came in I just left work," said Scheetz who also has a monitoring system in his car "so I'm always in touch."

The majority of calls handled by the Scheetz are for Lambertville police. His fire alarm system works on a three motion basis including alerting the monitors in the volunteers homes activating the sirens and ringing the bell in the rescue squad building.

With six phones on his wall, not to mention his own private line. Scheetz is often plagued with obscene phone calls.

The dispatcher also noted that occasionally they are bothered by residents who hear the alarms and call to find out what happened.

"I won't give out any information what so ever. Not even so much as a phone number. If they want that kind of information they will have to go to the proper officials," said Scheetz.

As part of his duties Scheetz keeps a running tally of all calls he handles and, makes monthly reports to the municipalities he works for. In April for example, Scheetz handled 946 calls for the city of Lambertville "which is quite a few for a small community."

"With this type of job you just can't ignore a ringing phone or take anything for granted. The people have to have somebody to do this job," said Scheetz who admits that years of experience have made both he and his wife a bit blase.

"You can't let yourself get involved or excited by a call. You have to remain cool and try to keep the caller cool so you can get all the necessary information. When we use the radio we try to talk in code as much as possible to save air and dispatching time," he said.

The father of four sons, Scheetz noted that the hardest part of his job has been the several occasions he has had to call the rescue squad for his own family. Scheetz is now serving on the committee organizing the county-wide radio network. He noted that if everything goes according to schedule the system should be in operation by October.

"I think we need this new system for two important reasons. It will help to tie all communities together allowing for better mutual assistance and will afford us the opportunity to get the best possible equipment for the area," said Scheetz.

The one drawback that concerns Scheetz is that the uniform 911 exchange will make it harder to locate a caller if he hangs up before giving all the information.

"At least with my system and different numbers I can usually pinpoint a call and have seldom been misdirected" said Scheetz.

"You never know where the next call will come from," said the dispatcher who recalls his "baptism" in dispatching emergencies came when he picked up his first phone call in city hall only to hear a woman's voice say, "The baby's born."