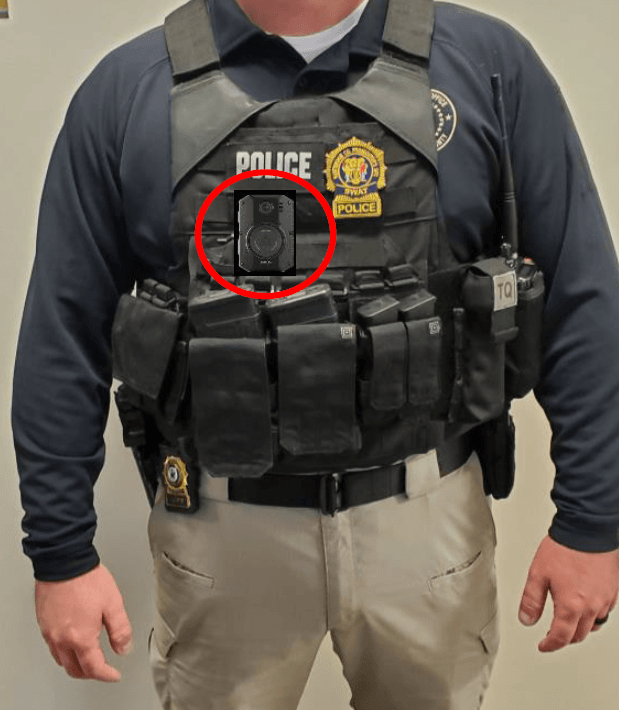 In compliance with New Jersey Attorney General Directive 2021-5, Detectives from the Hunterdon County Prosecutor's Office may now be equipped with Body-Worn Cameras (BWCs).

A BWC is displayed in the red circle in the adjacent photograph. View a larger image of the BWC (PNG).

What is the Open Public Records Act or “OPRA”?

On January 8, 2002, a new law was approved by the Legislature and signed into law by the Acting Governor which makes significant changes in the law governing public records. This law, P.L. 2001, c.404—--more commonly known as the Open Public Records Act or "OPRA"---declares government records to be made public unless they fall within certain exceptions.

What is a Public Record?

The term “public records” generally includes those government records determined to be available for inspection by public under N.J.S.A. 47:1A-1, which is part of OPRA.

Under that statutory section, a “government record” is defined as a physical record that has been generated, maintained, or received by a public agency in the course of its official business. The term does not include:

What is the Process for Obtaining Public Records under OPRA?

Where a legal determination must be made as to whether government records are “public records” as provided by law, the request will be reviewed by the Hunterdon County Prosecutor’s Office. You will be provided with a response with that information within seven (7) business days of your request.

The seven (7) business day time frame starts the day after your request has been received by the Hunterdon County Prosecutor’s Office at the address listed on the request form.

Records which are not readily available, in storage, or which will require a search of records, will be made available as soon as possible, and the requestor will be provided with response within seven (7) business days of making the request indicating the time which will be required to provide the records.

What are the Fees for Obtaining Public Records?

There is usually no fee involved for simply inspecting or viewing a document during normal business hours. A copy or copies of a government record may be purchased by any person upon payment of the fee prescribed by law or regulation.

The fee assessed for the duplication of a government record in the form of printed matter has been established as follows: $0.05 per letter size page, and $0.07 per legal size page or larger.

A 50% deposit is required for requests resulting copy costs exceeding $25.00.

If the nature, format, manner of collation, or volume of printing government record to be copied is such that the record cannot be reproduced by ordinary document copying equipment, or involves an extraordinary expenditure of time and effort to accommodate the request, the public agency may charge, in addition to the actual cost of duplicating the record, a special service charge that shall be reasonable and shall be based upon the actual direct cost of providing the copy. The requestor will be notified in advance of the special service charge and may object to the charge prior to it being incurred (N.J.S.A. 47:1A-5c). The fee established by the Hunterdon County Prosecutor’s Office for requested information which meets this criteria is a minimum of $12.50 per hour and may be adjusted accordingly.

Can I Appeal a Denial of my Request for Public Records under OPRA?

Yes, any person who is denied access to a government record may, at their option, institute a process to appeal that determination before either the Government Records Council or the New Jersey Superior Court:

Contact the GRC by phone at: 1-866-850-0511, by e-mail at grc@dca.state.nj.us or review the GRC web site at www.nj.gov/grc for information and to register your complaint. The GRC may be able to help resolve the problem over the phone. If not, you can receive a complaint form through the mail or from the web site. When you file the written complaint, the GRC will offer you and the public agency non-adversarial, impartial mediation. If mediation is not agreed to, or fails, the GRC will investigate the complaint. The investigation may result in findings or a formal decision by the GRC, which may include a hearing by the Council. In some cases, the Council can award attorney fees or fine a records custodian for failing to provide records. Details of this process are available from the GRC. There is no fee to file with the GRC.

Rather than proceed before the GRC, a person may start a summary (expedited) lawsuit in the Superior Court appealing a denial of access to government records.  A written complaint and order to show cause must be filed with the court. The court requires a $200 filing fee, and you must serve the lawsuit papers on the appropriate public officials. The court will schedule a hearing and resolve the dispute. If you disagree with the court’s decision, you may appeal the decision to the Appellate Division of Superior Court. If you are successful, you may be entitled to reasonable attorney fees.